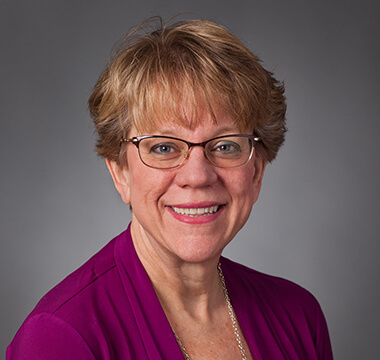 M. Anne McAtee has practiced law in Iowa since 1989, after receiving her Bachelor’s Degree from the University of Iowa, her MBA from St. Ambrose University and her law degree from Creighton University Law School. Anne primarily practices in workers’ compensation defense and mediation. Anne joined Hopkins & Huebner, P.C. in 1989 and in 1997 she became the founding partner of our Quad Cities office.

Anne has worked extensively with complex medical issues, conferencing with medical practitioners as well as depositions and preparation of affidavits. In addition, Anne has a broad understanding of labor and employment law as it overlaps with workers’ compensation issues.

In her free time, Anne McAtee enjoys attending sporting events, relaxing, and traveling to Lake Okoboji. Anne and her husband Terry have three children. John is a senior in high school; Hannah is a medical student at the University of Iowa, Carver College of Medicine; and Annabel attends Georgia Institute of Technology, majoring in Biomedical Engineering.