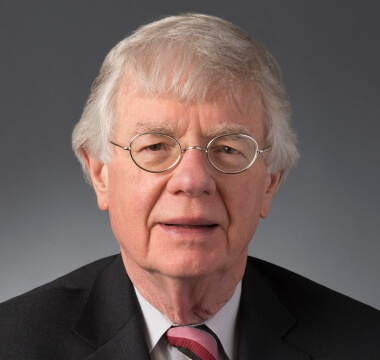 E.J. Giovannetti has been practicing law in Iowa since 1966. E.J. joined Hopkins & Huebner in 1970, and has been with the firm for over 45 years. A graduate from Creighton University for both his bachelor’s and law degree, E.J. now specializes in workers’ compensation and mediation.

E.J. Giovannetti is a member of the Polk County, Iowa State and American Bar Associations. E.J. is a current and past member of many civic organizations and committees and was mayor of Urbandale for 20 years.

Board of Governors, 1998-present

E.J. Giovannetti is a California native and has lived in Urbandale for over 40 years. He has two children, both graduates of Urbandale High School. E.J. is actively involved in the community and dedicates a significant portion of his time serving the public on various boards and committees. In his free time, E.J enjoys spending time with friends and family, entertaining, cooking and visiting Clarke County where he has a cabin.


Mercy Clinics, Inc. Board of Directors 2002