Taking a Stand on the Medal Stand

Social Justice: Taking a Stand on the Medal Stand

The Olympics just wrapped up, and with them came many of the things we expected – a beautiful opening ceremony, USA women’s basketball winning gold, comradery between the athletes, dozens of medals for USA swimming, TODAY anchors trying new foods on live television, and Allyson Felix becoming the most decorated USA track and field athlete of all time.  But along with these anticipated traditions, the Tokyo Olympics brought something new – the ability for athletes to participate in social justice demonstrations.

For decades, demonstrations or propaganda, whether political, religious, or racial, have been banned from the Olympics.  Despite this rule, at the Pan-American Games in 2019, hammer thrower Gwen Berry raised her fist and fencer Race Imboden took a knee while on the podium.  Both received yearlong probations from the U.S. Olympic and Paralympic Committee (USOPC).  However, as social justice activism in the United States increased, the USOPC decided it would no longer sanction athletes for such demonstrations.  This caused the International Olympic Committee (IOC) to rethink its position on the issue, as the IOC generally relies on the national committees to enforce its rules. 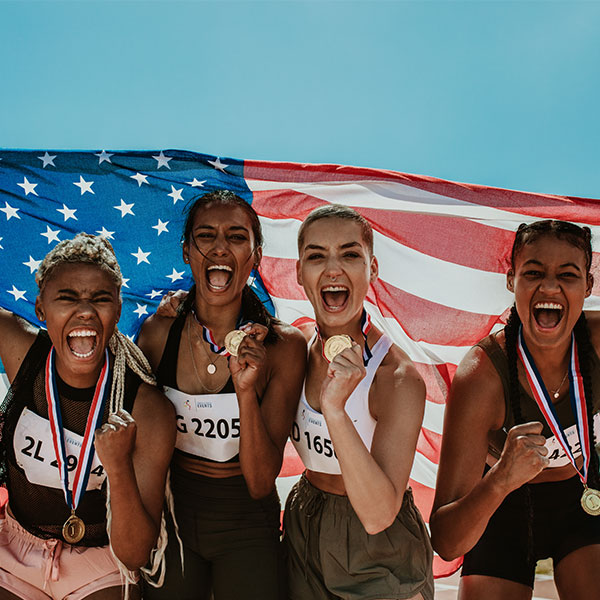 The IOC ultimately decided to amend its rules to allow for expressions on the field of play before the start of competition or during the introduction of teams or athletes.  However, the IOC continued its ban on expressions during official ceremonies, during competition on the field of play, and within the Olympic Village.
With these new rules in place, members of the USA women’s soccer team, as well as members of other women’s soccer teams, took a knee before their matches.  Gwen Berry raised her first before she competed.  Race Imboden had a black X on the back of his hand when he received his bronze medal.  Shot-putter Raven Saunders raised her hands in an X while posing for a photo on the medal podium, though this was still technically against the IOC’s amended rules.

Just as the IOC can make rules regarding demonstrations by athletes, so too can employers make rules for their employees.  Although the First Amendment protects the right to free speech, it does not prevent an employer from firing or disciplining an employee for engaging in activism at work, so long as the rules are enforced equally for all employees.  Most workers are at-will employees, and can be fired for any legal reason.  If you have questions about activism in the workplace, you should contact an attorney.

Tying Up Loose Ends After a Divorce

When the Dog Bites, When the Bee Stings